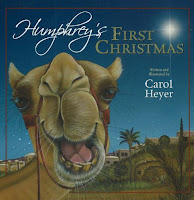 Those of you who are familiar with the biblical Christmas story know about the three kings who brought gold, frankincense, and myrrh to the baby Jesus. The wise men are a staple in every Christmas nativity scene. But what about that camel that stand off on the side.

is about the camels who carry the three kings to the holy land. Or rather, one camel named Humphrey. Humphrey is, for lack of a better phrase, a self-entitled camel. You pretty much get this right off when you read the first sentence of the book: "Beloved, Most Beauteous and Exalted King of All should be my name." But participating in the events of the very first Christmas are going to give Humphrey an attitude makeover.

This book has a great message about remembering the true meaning of Christmas, and the text is very entertaining. I love hearing the story of the first Christmas through Humphrey's voice. But the thing that really makes this book are the illustrations. Heyer's attention to detail is absolutely amazing.

I had the opportunity to introduce Carol Heyer's snowflake during Robert's Snow 2007. I posted some of the magnificent illustrations from this book over on that post, so if you'd like some close ups head over to that post. I mean, really, you need to see the crooked teeth on this camel!

Overall, this is one of the best children's books I've read about this particular part of the Christmas story, and it's one I'll be keeping around to read to my future children in December.

Sounds like a great book. Anything that expresses the true reason for Christmas is a great thing.

A kids book must have awesome illustrations. Glad to see this one had them. :)

I completely agree. It's just not a good book without at least decent pictures. It's so nice when a book has both a good story AND great pictures!

I hadn't heard of this book before but I'll be looking for it now. Humphrey is adorable!! I've always loved children's books and the illustrations. My kids are older now but I still enjoy the books and I've kept many of theirs. This would be a great book to share with the little people in the family. Thanks for your review!

I know what you mean! I kept a lot of my picture books from my childhood. I don't have children yet, but someday I'll bring them out for them. And in the meantime I'll just enjoy them myself. :)

My parents used to buy a nice hardback children's book for us every year. Frequently it was the Caldecott winner, but sometimes it was like this one (The Littlest Angel....etc.) and those were always so great to read around Christmas time. :)