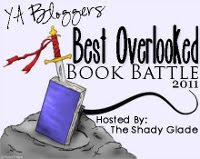 Well, here it is battle fans. The moment you've been waiting for. It's time to announce the winner of the 2011 YA Bloggers Book Battle. If you haven't had a chance to yet, take a peek at the Reader's Choice Awards. And then proceed to see who wins.

Bracket 24:
Out of My Mind by Sharon Draper VS. StarCrossed by Elizabeth C. Bunce
Judged by Emily from What Book Is That? and Amber of Amber's Teen Reads

After several months, lots of intense rounds of judging, it's come to the final bracket. An undefeated contest comes up against a highly acclaimed book that was eliminated early, but was granted a new chance at the winning spot in Series 4. So which book would win?

It certainly wasn't an easy a choice. Judge Emily had this to say about the two contenders:


"This was a tough choice, as in my opinion both books were excellent in their own ways. They're from two totally different genres- one is a realistic contemporary narrated by a young girl with cerebral palsy, and one is a fantasy adventure, narrated by a sneak-thief with magical abilities."

Judge Amber had this to add:


"In StarCrossed, Elizabeth C. Bunce created a whole world around the suppression of magic, sneak thieves and mayhem. Bunce created a world where silver jewelry can help hide magical powers from those who want to squash magic. She created a character named Digger who had to stop trying to hide and not take sides in the war against magic and determine where she stood.

While in Out of My Mind, Sharon M. Draper urged us to look beyond what we see to the person inside others. We met a girl named Melody who has Cerebral Palsy and is seemingly locked inside her own mind. With the help of an amazing aide, a neighbor and her parents, Melody receives the tools she needs to show everyone she is brighter than anyone gave her credit for."

So do you think you know who the winner is? Scroll down to see the answer: 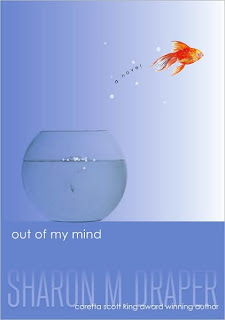 ...Out of My Mind by Sharon Draper!

And with that, we've concluded the battle for another year. Phew! This year was twice as big (and twice as much work) so hopefully you had twice as much fun! Look for a roundup of all the posts coming the next few days so you can catch up if you missed anything.

Thank you to all of our excellent judges. And don't forget to click through the links to read all the judge's posts. They go into a lot more detail than I do!
Posted by Alyssa F at 4:55 PM

YAY! I really loved this book--it stays with you and really makes you think.

Thank you for the opportunity to be a judge! I'm looking forward to seeing the ultimate winner. :D

Thanks for all your hard work. This is a great idea, and I had so much fun following along.

I didn't realize it was an overlooked YA "debut" novel contest.

Cheers to Mary Faber in Bloody Jack as best main character! I love this series!